Transportation – particularly flights – are often the largest expenditure of any world traveler’s budget. What’s even worse is the knowledge that ticket prices seem to fluctuate hundreds of dollars within days, if not hours! How can it be that the same route can have budget flight tickets priced at $500 and others at $2,000? When it came to booking a round trip flight we were determined to get the best price possible and not just take the first fare we found. In the end, we had managed to save around $3,000 on our trip from Vientiane to Seoul, Hong Kong and Bangkok. Want to know how we did it? Read on.

We had been in Vientiane for over a week and had finally decided where we wanted to go next. We decided on a week in Hong Kong and a week in Seoul before flying back to Bangkok to sort out the visas for our visit to Europe later this year.

We usually fly with Air Asia around this region, as their prices are very competitive and the service has always been good when we’ve flown with them. So this is where we started our research.

We quickly realized that they wouldn’t be much use on this trip, as the only flights they have from Vientiane are to Kuala Lumpur, and they don’t fly between Hong Kong and Seoul. It was possible to build a trip, but it would mean flying back to Kuala Lumpur too often. We worked out the price though and it came to around $850 without luggage and other extras, so at least we had a price to aim for.

It’s amazing that there are price differences between different flight booking websites…but there are! We’ve used many, but for this trip we eventually settled on Expedia.com.

How is it that different booking sites have different pricing advantages? Well, for one, not all booking sites list every available airline. Some airlines don’t allow access for booking to every booking site, particularly the budget airlines.

Additionally, some booking sites are able to provide better deals based on agreements with airlines or by taking advantage of hotel and car rental bookings. It really did save us money as we couldn’t find the cheapest combination of flights on the other sites we tried. So this round trip price on Expedia was our starting point – and it came in at a whopping $1,984 per person ($3,968 for both of us). WOW!

As we mentioned above, not all budget airlines have their flights listed on the major booking websites. We did try Air Asia, but they don’t fly all the routes we needed to book. But don’t discount them, because you can still save money by booking some of your flights with them.

Air Asia has flights from Seoul to Bangkok, we priced the first two legs with Expedia and the final leg with Air Asia. That brought the price down substantially. Vientiane to Hong Kong to Seoul came to $1,055 per person with Expedia, while Seoul to Bangkok with Air Asia came to $212, excluding luggage and other costs. That brought the price down from $1,984 to $1,261. But this still seemed too much.

Tip 3 – Change The Order Of Your Flights

One often overlooked tip to buying cheap flight tickets around the world is the order in which you fly. We started to wonder if it made any difference what order we visited Hong Kong and Seoul. We had originally decided on visiting Hong Kong first simply because it was closer. So we re-checked Expedia but changed the order to Vientiane to Seoul to Hong Kong.

As Hong Kong is closer to Bangkok that Seoul is, that meant that the final Air Asia flight should also be cheaper. So we re-checked that and it came in at $112. So now the price was down to $464 each.

Most booking websites now give you the option to choose “One-Way”, “Round-Trip” and “Multi-Route”. We decided to give this multi-trip booking a try. Would we get the flights any cheaper if we booked them separately? Vientiane to Seoul to Hong Kong came it at $352, so we checked the prices of the two flights as single journeys.

We were in for another big shock.

Vientiane to Seoul was $382 and Seoul to Hong Kong was $461 for the same flights. So both single legs were more expensive individually than booking both together. Booking them separately would have cost us $843 – more than double the price. I read that this has something to do with airlines only having more expensive tickets available for single journeys. So if you wanted to travel from Vientiane to Seoul, you’d get a better price if you also book a flight to Hong Kong that you didn’t need. Amazing.

Tip 5 – Be Flexible With Your Travel Dates

I think this is one trick that most people already know, but it bears repeating. There can be a big difference in flight ticket prices from one day to the next, so if you can be at least a little flexible with your travel dates you can make big savings.

We played around with the dates but the dates we had already selected were the cheapest. Just flying one day later on the first two flights increased the price from $352 to $485.

It took quite a few hours work but saved us a massive amount of money. The moral of the story here is that if you’re willing to dedicate a couple hours and some creative thinking, it’s possible to buy cheap flight tickets anywhere in the world!

We’ve traveled extensively over the last couple of years and booked most of  our hotel stays with Agoda.com. Give them a go. They have great customer service and you can collect points towards free stays. 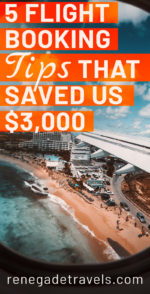